Watching and listening kids from the back neighborhood playing in their backyard yesterday is so refreshing, the world doesn’t stop for them.
Stay home, stay safe, save others.
at April 09, 2020 No comments:

Vacuuming the rugs is a chore my husband helps with to keep the house decently clean, a task that helps us to keep a routine. He loves those sweats I made for him, they came out very wide for the legs, but he doesn’t mind. 😊
Stay home, stay safe, save others.
at April 08, 2020 No comments:

I bet many of you drink a hot beverage in the mornings. I do it  as part of my daily routine. Sometimes I drink coffee, less often tea. A bit of quiet is welcome while coffee or tea wakes me up fully. I normally sit in front of that window you see in the background, well....that is when we have sunny days in the winter. When we do, the sun lights and warms up most of the kitchen in the mornings, it is the best cheerleader to start the day. What do you drink in the morning, how do you drink it?
Stay home, stay safe, save others.
at April 05, 2020 No comments:

Some people think that staying at home might be tedious or boring....well they might be right. We are used to go out at free will and this is a change some might find hard to adapt to. I never thought that daily chores would be something that I would consider to sketch but under the stay at home orders that seems to be changing. I see it now as an opportunity to sketch other aspect of life overlooked by truly yours. I read an article about an astronaut, who was asked, given his experience in confinement for a long periods of time, what would it be his recommendation to keep yourself sane. He said.

Well...that looks like something doable. I don’t feel motivated enough to draw things or rooms in my house. I’m more interested on doing sketches of activities done at home for the duration of this unprecedented time.  And because there’s a limited amount of people in this house, than means you will likely see sketches of my husband and I.

I made this sketch of myself making the bed, that’s the first thing I do in the morning. What keeps you busy?

Stay home, stay safe, save others.

The other side of the door

All those old doors which have my imagination wondering what’s behind them made me wonder no more. This sketch is the other side of one of those doors. I sat on the steps by the luscious interior gardens looking at the door that leads to outdoors in the street. The color of the flowers cheered me up and the calming silence took me to another reality for some minutes, away from the uncertainty of the one we are all experiencing worldwide.
at March 19, 2020 No comments: 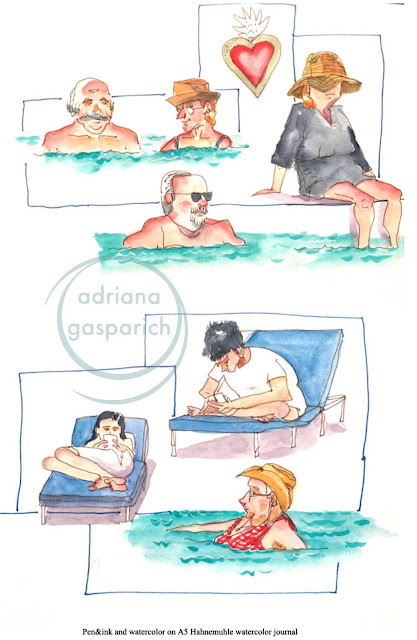 This sketch was done last week when we as other people were still out enjoying ourselves amid of the virus pandemic. There’s no cases confirmed in San Miguel de Allende as of today according to official sources, but government is cancelling all social and cultural events starting today. This scene of people in public spaces will be the last one I’ll see for  a while.  I’ll hang to it until we can do this again. Take care of yourself.
at March 17, 2020 No comments:

Exercise. A method to transfer a sketch using watercolor graphite. 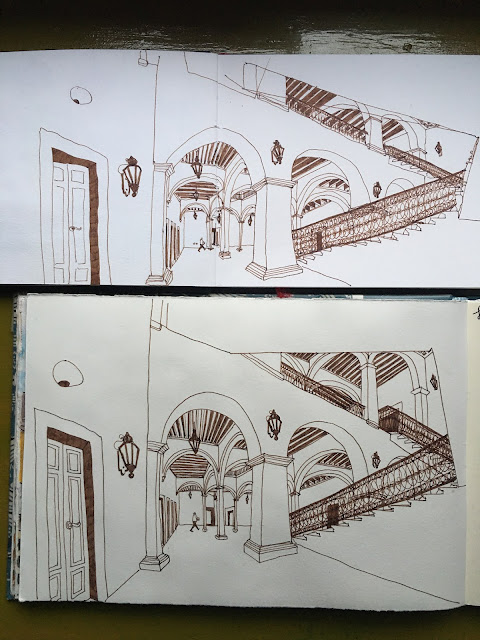 This is a continuation of the previous post in this blog. The sketch on top is the first sketch I did, I really liked it, but it has some things that bothered me. I did the sketch directly with pen and ink, there are obvious mistakes, the perspective wasn’t right and I didn’t like the folding of the sketchbook right in the middle of the sketch. I liked the sketch so much that I would make an effort to transfer a corrected one to another sketchbook.

Here are the steps I did. 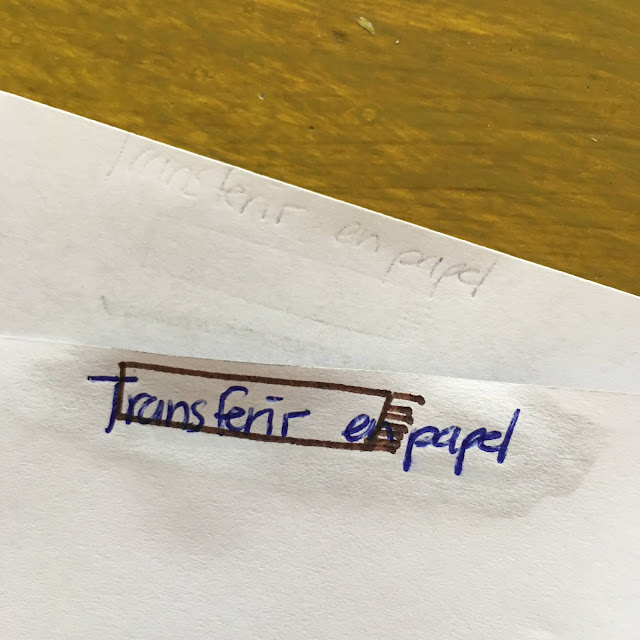 1. I made a test. I used watercolor graphite and painted a saturated wash in a piece of paper and let it dry. Then I wrote on it to see how clean the transfer would be. It came out clean. Then I erased the lines to see if it was erasable and it was, this was important since I wanted to retraced with ink over graphite. It looked like the method would work. 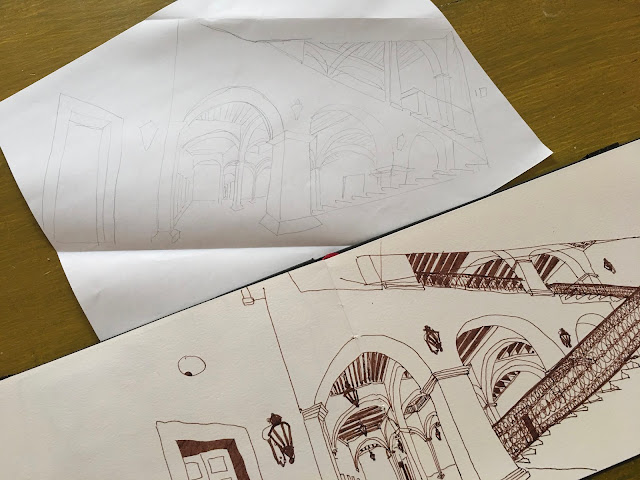 2. I traced the original drawing by putting a clean piece of paper on top of the original sketch and traced lightly the basic lines. 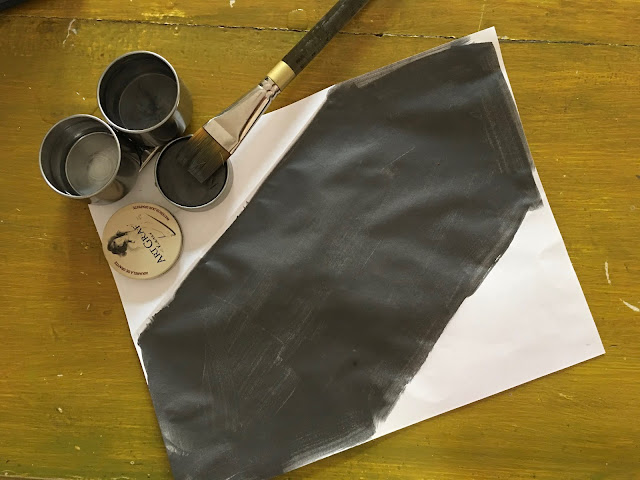 3. Then I painted the back of the traced drawing with a saturated watercolor graphite wash, making sure all the  lines of the sketch were covered. 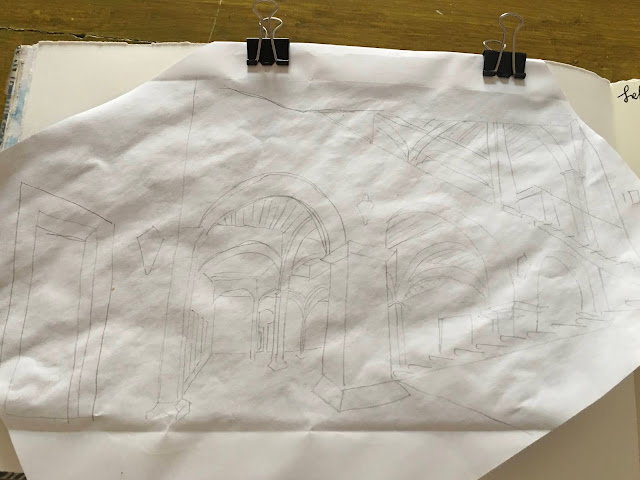 4. I placed the drawing on the blank page with the graphite side facing down. I made sure  the sketch fit and it was centered on the page. 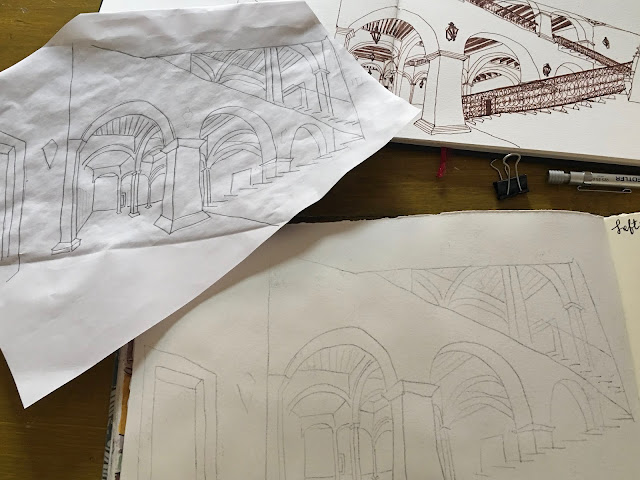 5. I retraced the pencil lines of the sketch applying more pressure to guarantee the transfer. 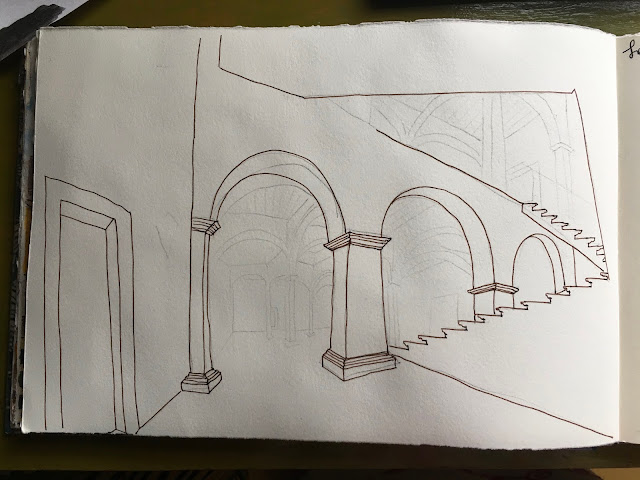 6. Then I inked the transferred drawing making corrections in the process.


7. I erased the graphite lines and some spots here and there and it came out clean! The look I was expecting. Then I worked on details and voila! A new and corrected sketch. And I just found another use for watercolor graphite that I gladly share with you.☺️
at March 14, 2020 No comments:

Email ThisBlogThis!Share to TwitterShare to FacebookShare to Pinterest
Labels: Exercise.

The former royal or consistorial house, now the municipal presidency is located in front of the main jardin. The day here is very hot today, but as soon as you cross the foyer the temperature drops instantly around 20 degrees, a quiet and comfortable shelter from the afternoon heat. The building is itself very simple, but I found a table and chairs hidden in a corner where the view had an amazing perspective. 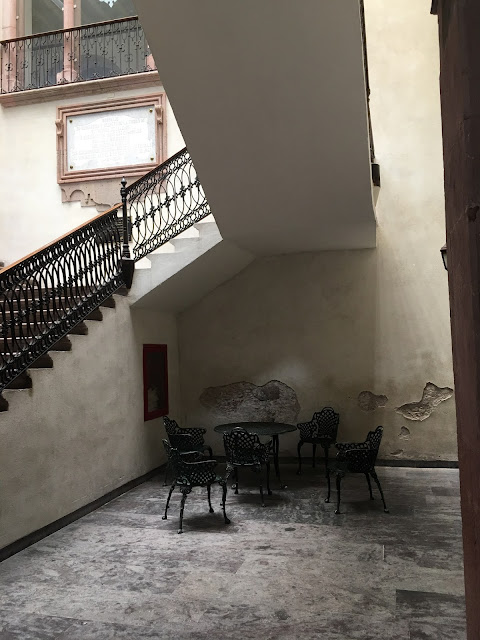 I carried with me a small sketchbook and a pen only today. This turned out adequate for this site. The white walls and the dark wood beams were almost a monochrome theme except for the columns which were made pink stone somewhere in the middle value. I don’t think the sketch cries to define the columns, the contrast of value and the perspective will do.
Here is some information about the building displayed in site. 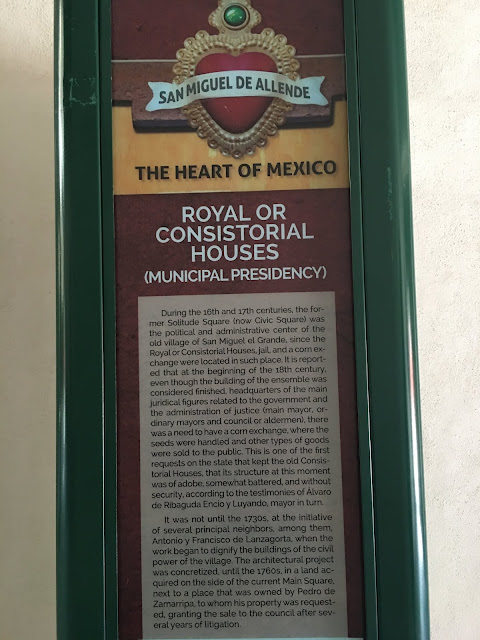 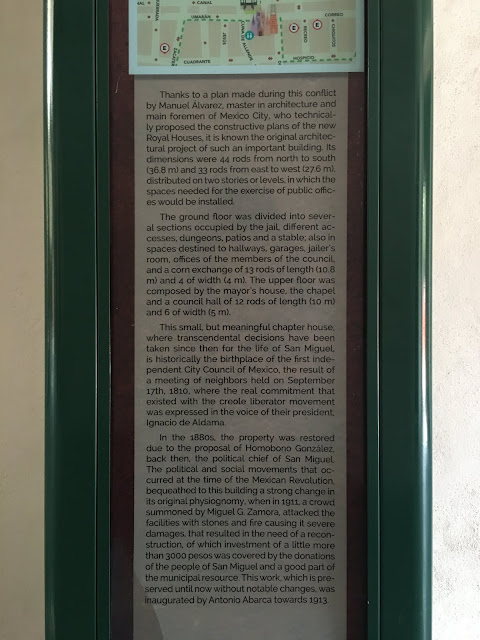 This stairway is in an old building here in San Miguel de Allende. The facilities were built in 1946 and little has changed since then, I was told. I LOVE the charm of old buildings. Many places are built to look old but in this place you breath old, don’t get me wrong, everything is functional and clean. It was hard to render the old surfaces in paper, the steps and the wall mainly. My approach was to use a mop brush almost dry and drag it randomly on the paper, also I thought some ink dots made with a pen here and there would help for this effect. The bench is made of concrete or perhaps red brick and it’s covered with blue tile. It’s cute but it’s cold if you sit! Ha! This area is quiet and away from crowds. I could easily remember this corner but certainly there’s space for it in my sketchbook.
at March 10, 2020 No comments:

The flowers of Lupita

These are some of the flowers that the cleaning lady Lupita put in our place every week. Since Lupita learned that I was sketching them she started to bring more variety. I didn’t rearranged the flowers, I just sketch them the way she does, she have a good eye. Lupita is a kind soul, I love her, more than I do flowers. 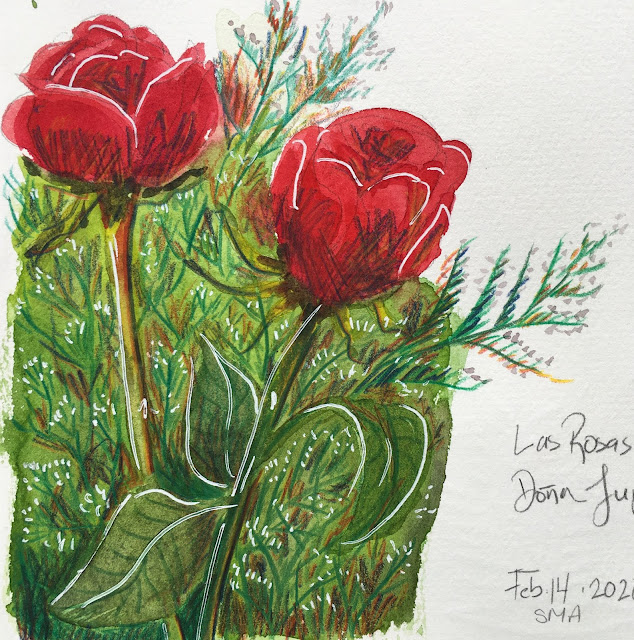 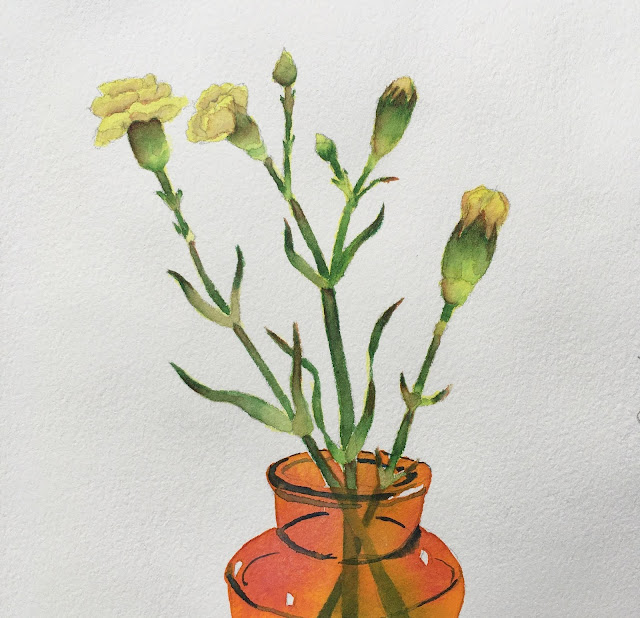 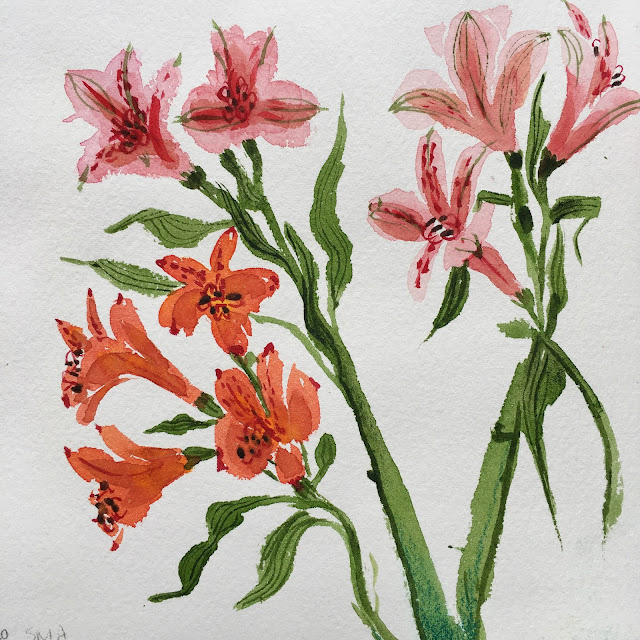 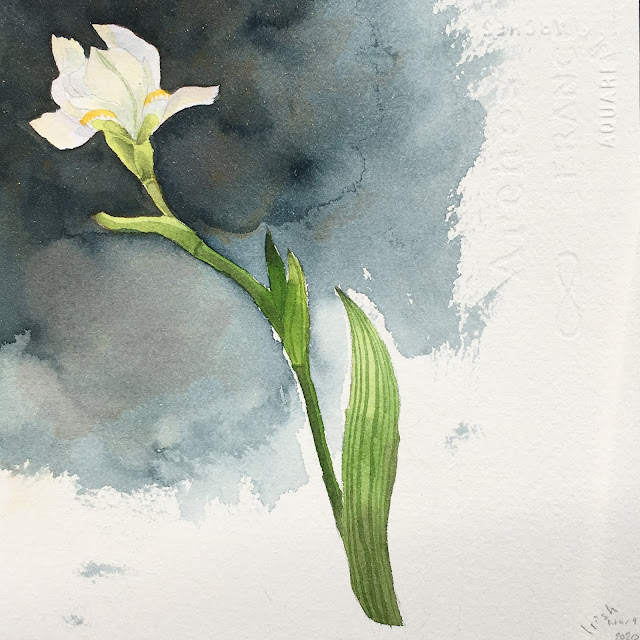 I always wanted to visit the museums in Dolores Hidalgo in the state of Guanajuato. Dolores Hidalgo is just a 35 minute drive from San Miguel de Allende, it is not as popular among expats as San Miguel de Allende. Although Dolores Hidalgo is also known for making traditional and extravagant ice cream flavors, this city is better known nation wide as the city where the Mexican Independence from Spain started in 1810. Everything is about Miguel Hidalgo in the city of Dolores Hidalgo as Ignacio Allende is to the city of San Miguel de Allende, two of the national heroes of the Mexican Independence War.
We spent the afternoon in the main jardin after visiting two museums, the House of the Father of the Independence Miguel Hidalgo y Costilla and the Museum of Independence. There’s a statute at the center of the jardin, it’s a monument to Hidalgo shown in the sketch, also the sketch shows the church in the background where the he started the movement. The afternoon was so beautiful, the jacaranda trees were blooming, vendors selling their snacks and families spending the evening savoring ice cream and chilling on the benches around the jardin, all under the shade of very old trees, on a hot day. Funny that I noticed how street vendors change along the day. Tamale and atole vendors in the morning, ice cream in the afternoons and hamburgers and hot dogs at night. Yeah we ate all.
I included later in the sketch, a typical family passing by, the face of the man carrying the toddler looks upset, but it wasn’t the case, it just came out that way. I used Lamp black paint to make the dark green of the statue and the dark blues of the family, lamp black paint....what a beauty! I’m loving using black paint!
Do you want to know what a extravagant flavor for ice cream is? Take a look! Avocado, shrimp, whiskey, beer, mezcal, tequila, mole sauce, rose petals, garambullo, marzipan, carrot, chicharron, corn, aloe vera, and then some flavors we all know. It was a fun visit to see museums and to taste at least a dozen of ice cream flavors! 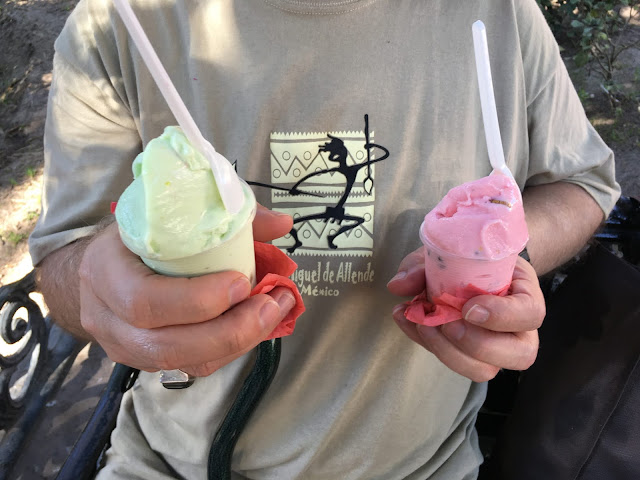 Adriana Gasparich
Welcome! I'm a retired food engineer and wife who draws and paints on its spare time. I'm native from Mexico living in the Chicago area, so what you'll see mostly in this blog are images as a result of my frequent trips in between these countries. I mostly use pencil, fountain pen and watercolor. I like to add lots of color to my work, post it online and share some thoughts about it. Feel free to leave a comment, I'd love to hear about you. Thanks for visiting!